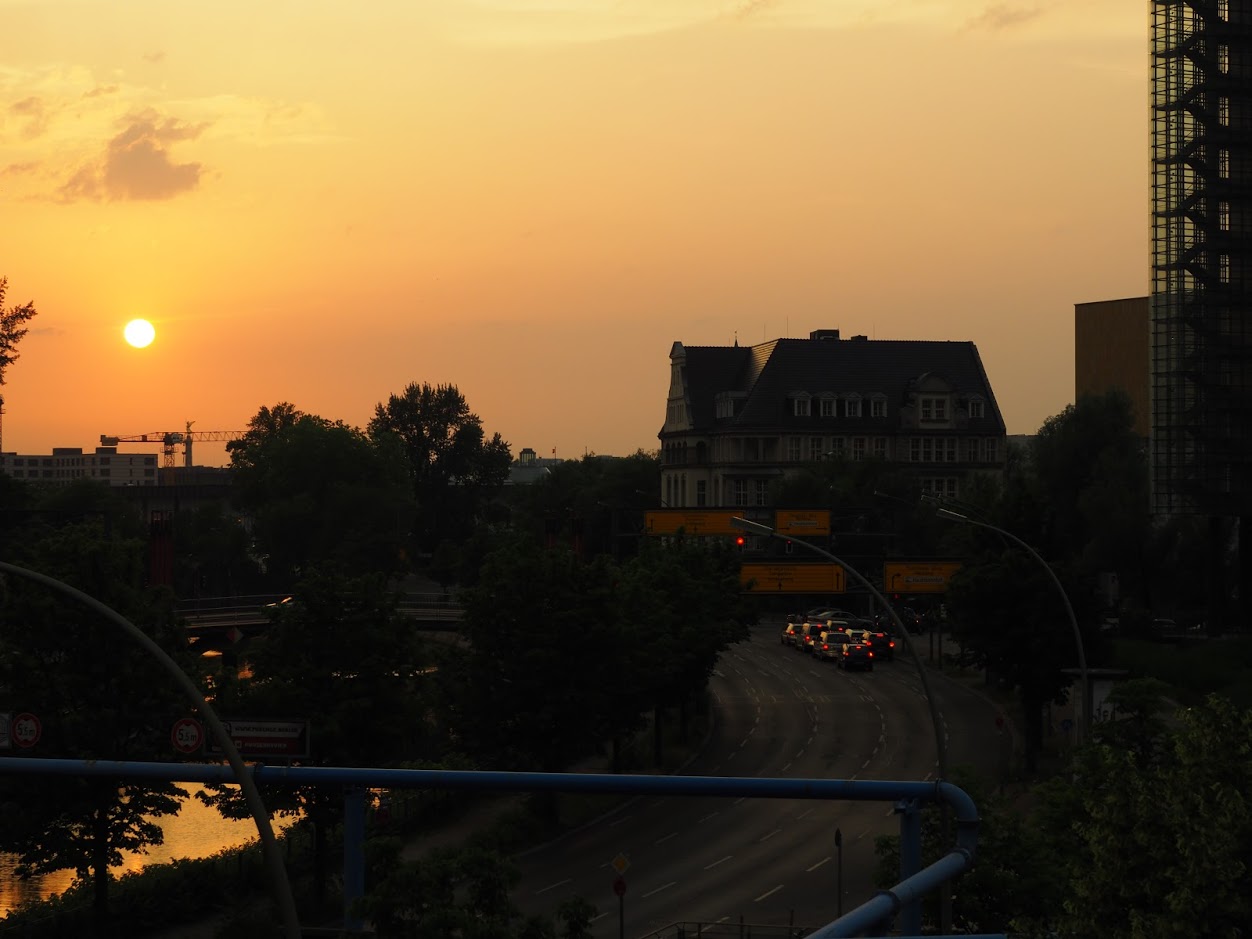 Month after month last summer, we saved our pay checks in order to travel to Germany and Denmark with our older sister, Justine. And boy, was it a trip of a lifetime.

We started our travels in Berlin, Germany, famous for fantastic doner, great architectural feats, and history. Our first impressions of the city went a little like this: “Justine is talking to the taxi driver in perfect German, I think I’ll just stay quiet the whole ride. I’m scared to try and speak German because let’s be honest, I didn’t keep up on my German skills. Wow, this city is huge. Intimidating. Can you say culture shock?”

But after the first day spent walking around and learning the German ways, we fell in love with Berlin. Justine told us the quote below and after experiencing Berlin, we gotta say, we agree with Mr. Wowereit.

The second day in Berlin, we stopped at most-to-all of the biggest attractions like the Reichstag, Brandenburger Tor, and the Berlin Cathedral. Each one of these attractions was breath taking. Climbing the Reichstag gave us a picture-perfect view of Berlin’s skyline and demonstrated the importance of transparency in the German government. The Brandenburger Tor has a special little place in our hearts. In our high school german class, our teacher had a giant poster of the gate on the wall, so every day for four years, we stared at that poster. Standing in front of the real thing was like a dream. We were able to see the Berlin Cathedral from a boat, which was beautiful. We couldn’t stop snapping pictures or video clips of it.

We also went to Risa that night and we gotta say, their chicken gave Raising Cane’s a run for their money. #sorrynotsorry

You can’t go to Germany without having a drink of course. We discovered Prater, a beer garden with row after row of picnic tables and twinkling lights strung about. It’s actually the oldest beer garden in Berlin!

The second day we explored the Siegessäule, a monument to Prussia’s victory in the Franco-Prussian War. Climbing the 285 stairs was our workout for the day and our reward was the view from the top. It’s located in the middle of the Tiergarten so there’s a perfect 360 of Berlin’s gigantic skyline. 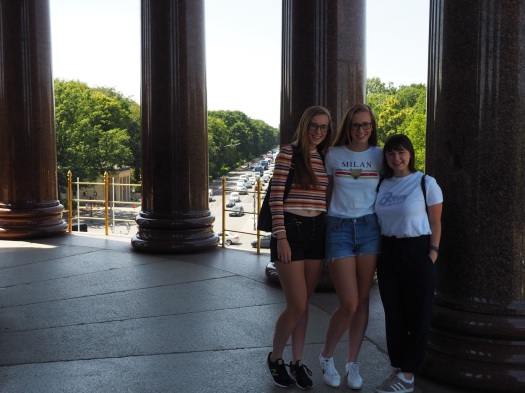 The Photography Museum in Berlin is also very interesting, especially Helmut Newton’s work. He was the first photographer to take nudes and turn them into fashion. His huge book, Sumo, is also on display at the museum. And we aren’t kidding when we say it’s huge. The first run weighed 66 pounds. A book. 66. Pounds.

Then the East Side Gallery of course! We find the history of the Berlin wall compelling, so walking along the painted murals is intriguing. The murals varied from intricate lines to simply one phrase. But each one was powerful and conveyed a message about humanity, history, or government. (The “Save Our Earth” one was a favorite, props to artist Indiano) 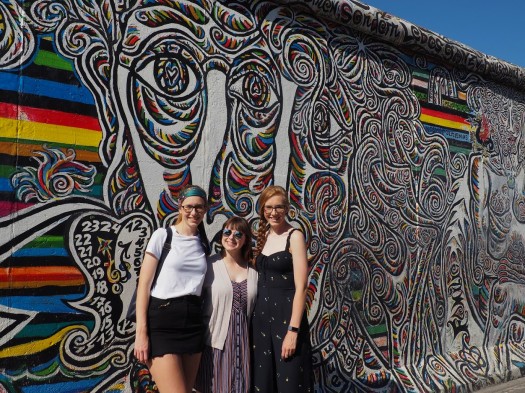 We also bought delicious cherries at the Turkish Market on Friday morning. The street was lined with all kinds of vendors from fruit to clothing to fabrics. It was something we are glad we experienced!

Oh, the beach. Or beach on a lake. Ya know, a beach is a beach and we’ll take either. The Strandbad Wannsee was absolutely gorgeous with a nice beach and clear water. We took advantage of the food and drinks available right off the beach and took a nap under the sun. A relaxing afternoon.

Saturday morning we rushed to catch our bus to Hamburg. Rushed like we ate half of a banana for breakfast rushed. But it was all worth it because we got to see charming Hamburg. We walked around and saw St. Nicholas’ Church (opened in 1195 – wow) which we learned had burned down in the great fire of May 1842. It was restored but then damaged again by WWII bombs.  Some of the walls are still standing, and the tower still stands tall. It’s an eerie feeling to stand in the middle of the ruins, but breath taking at the same time.

Since Hamburg is a unique city in Germany because it’s a port city, we couldn’t pass up the opportunity to visit the harbor. We got a really nice view from the Elbphilharmonie, a new concert hall in Hamburg.

Sunday morning in Hamburg we went to the fish market. What an experience it was. Vendors get the attention of customers by yelling at other vendors or what their item costs. “Zehn Euro, zehn Euro!!” was a phrase heard a lot.

Then we caught our bus to Copenhagen, Denmark. We knew we had to go on a ferry, but what we didn’t know was that they put our bus on the ferry too. Wild. We ate at a restaurant called Gorms right down the street from our hostel and oh my, was their pizza good. We reveled at their Caprese salad (so so good) and garlic bread.

That night we took a stroll down Strøget, a famous walking street filled with luxury brands like Gucci, Chanel, and Prada. Our dream come true.

Monday morning we climbed up the Round Tower (fantastic view) and kind of accidentally stumbled on the guards changing at Amalienborg Palace.

The street Copenhagen is probably most known for is Nyhavn. Right on a canal, the brightly painted houses look like something out of a movie. But, if you want to eat or drink at Nyhavn be ready to spend some serious money. We paid about $7 for lemonade but honestly, we aren’t even mad about it.

Tivoli Gardens is also a must see when in Copenhagen. It is one of the oldest amusement parks in Europe and was actually the inspiration for Disney World.

If we were to describe the Christainsborg Palace in one word… just kidding, there’s too many words for such a beautiful place. What was unique about the palace was that the royal family still uses the rooms today, so who knows, maybe we were standing where the Queen was!

Reffen is a super cool street food market where most of the shops are made out of shipping containers. It seemed like there was every food under the sun: Italian, Greek, American, Indian, sushi, ice cream, shaved ice, the list could go on.

We flew back to Berlin and spent our last day shopping and trying to soak up as much of the city as possible. Visiting the Brandenburger Tor “bei Nacht” (by night) was one of the last things we did, and maybe one of our favorites. Like we mentioned earlier, the gate has a special place in our hearts, and seeing it at night was stunning. 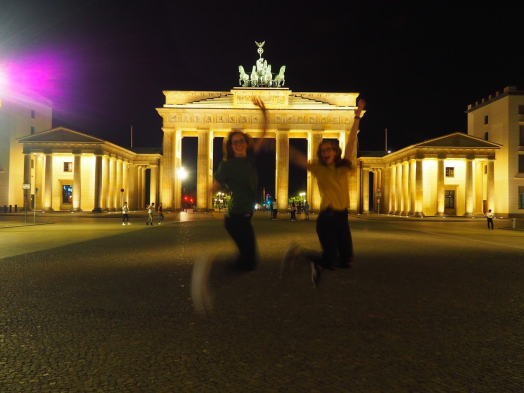 Berlin, Hamburg, and Copenhagen stole our hearts. It was a trip of a lifetime and we are set on being back again someday. Big thank you to Justine for being a great travel buddy and guide, because we would have been super lost without her.

One Reply to “SISTER TRAVELS”

Couldn’t have asked for a better trip to Vegas🥂🍾
Some details from the June camera roll - not going to lie ice cream is our fav but those homemade poptarts…yum😋
The back of this dress.. is ridiculous(ly cute)
Hot summer nights, mid-July 🌞
Strolls through the streets are better in breezy maxi dresses 🤍
The perfect dress for a 90 degree day in Alexandria 🌞
Follow pair of trends on WordPress.com
Loading Comments...
%d bloggers like this: